Have you run out of space on your C:\ drive?

Or do you have a super-fast SSD that is too small to hold all your steam games at the same time?

Following on from a very interesting post on the Steam forums I've created a little app to make moving the files and creating the junction points much much easier!

Here I have my steam folder in the default location, and the application should find that for you. If not, select the \Steam\SteamApps\Common\ folder yourself, and a secondary hard disk D:\, where I have created a folder.

Note that Steam Mover can be used to move any folder around (by changing the Source Path), but for Steam the maximum benefit is in moving individual games from the Common folder.

I simply select a few games I don't play very often, and click the "Right Arrow" button. This fires off a few command line windows - please let them run to completion.

It is using the built-in Windows commands: xcopy, rd, and mklink. If you want to see the exact commands it is running, tick the "I want to run the commands myself" box. 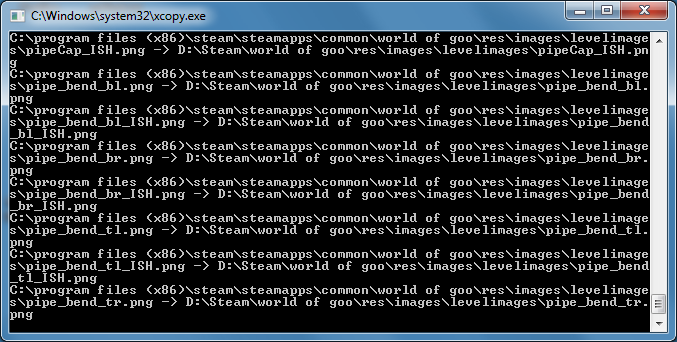 Once finished, you will see that I have moved Left 4 Dead and World of Goo to my D:\ drive, but because of the Junction Points created on the C:\ drive the games continue to work in Steam. 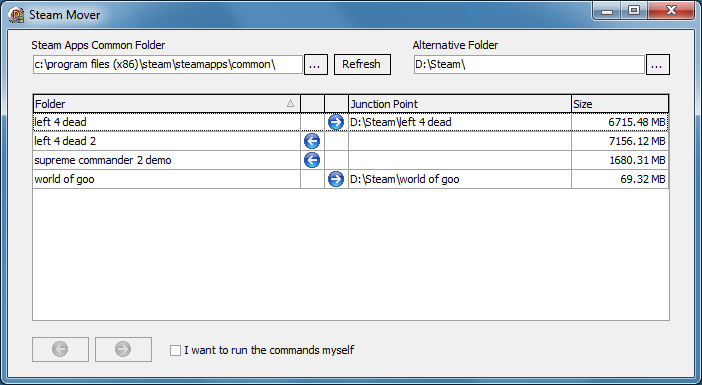 If you want to move games back to your C:\ drive, simply click on the left arrow button.

Please ensure you download from the above link - various "cracked" or "official" versions are hosted on other sites, which is hilarious seeing as its freeware.

The initial release. So far, it's been so good that it hasn't needed updating. :-)

Its a Delphi Application, and no installer is required. Just unzip to wherever you want and run SteamMover.exe. If you get permission errors when moving folders you may need to right-click and "Run as Administrator".

Simply delete the SteamMover.exe, and if you really want you can remove the Registry keys from HKEY_CURRENT_USER\Software\SteamMover.